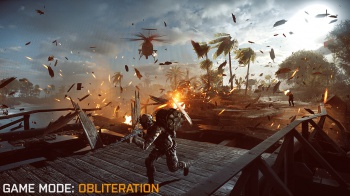 The PS4 is out, and Battlefield 4's happy warriors are less than happy, as the game's servers are crashing constantly. At first EA attempted to blame Sony's 1.5 firmware update, claiming that it "results in stability issues while playing games on the system," but it soon retracted this statement as it became clear that the problem was more significant, affecting services elsewhere, particularly PC. DICE has since said that a denial of service attack on the servers is to blame.

"Hi guys, we are being targeted by a DDOS, but working on fixing it asap," said DICE's Ali Hassoon on the Battlenet forums. "I'm sorry somebody is ruining your and my day. Rest assured we are doing our best to mitigate the situation though." Hassoon also said that a new server would be issued for PS4, to help solve a severe crash issue.

DICE has since said that, in addition to the PS4 server issues, an Xbox 360 game update and PC game update are coming soon. There's no way to know when, but DICE says it ought to be able to give a rough timing estimate "at a later date." It hopes the Xbox 360 update will get through final testing and be released before long. DICE asks that anyone affected by this issue follow its support thread, where updates will be posted.