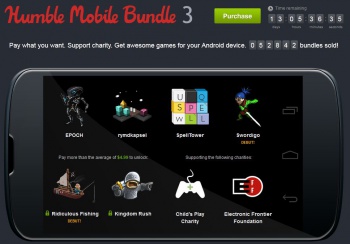 Humble Bundle is offering a new set of shooter, strategy, and word puzzle Android games for the next two weeks.

The Humble Bundle recently rolled out its new digital storefront, but it remains best known for its pay-what-you-want bundles of DRM-free games. With the WB Humble Bundle now closed, the website is now returning to Android platforms with its third mobile gaming pack. The Humble Mobile Bundle 3 (not to be confused with the Humble Android Bundle) is offering six DRM-free Android games for the next two weeks, with bonus titles coming soon.

The bundle opens with EPOCH, a 3D post-apocalypse action game about a robotic soldier seeking the last human outpost. rymdkapsel is a space station strategy game of designing bases with tetomino shapes before fighting off alien invaders. SpellTower looks like a combination of Scrabble and Tetris, where players can solve word puzzles in single and multiplayer modes. Swordigo is a touchscreen hack-n-slash where you level up a single fantasy character while seeking a legendary sword.

For paying above the average (currently $4.99), players will also get copies of Ridiculous Fishing and Kingdom Rush. Ridiculous Fishing is Vlambeer's game of catching fish with shotguns and knives, while Kingdom Rush is a fantasy tower defense game with RTS elements. As a bonus, Kingdom Rush's Humble Bundle edition comes with an exclusive hero system that lets you unlock powerful bonus characters, while the Bundle itself includes four soundtracks.

If you're looking for games for your Android device, the odds are good that you'll find something you like in the latest Humble Bundle. Personally, however, I'm just curious what will come with the inevitable Humble Indie Bundle 10. Who knows what the website will be able to offer with all the goodwill its built up?