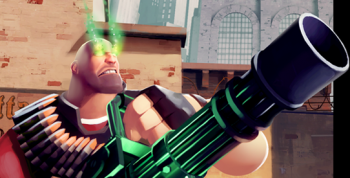 Good news everyone! There's a Team Fortress 2 update in the pipe, and from the looks of things, it appears to be more than just new hats. The "Two Cities" update will bring two new "city" maps for the Mann vs. Machine mode, as well as a third non-city map for the non-Mann vs. Machine mode. It'll also come with weapon effects, which are earned from playing the "Tour of Duty" paid gamemode of Mann vs. Machine mode.

The first map, Mannhattan, takes our mercs all the way from the sun-blasted gravel pits of the Badlands to the urban sprawl of the East Coast, where they'll have to defend the manufacturing arm of Saxton Hale's boutique Mhankö line. annhattan's robot hordes can advance their own spawn points and introduce new bombs into the map for the first time, making for a unique new MvM experience.

The second "city" map will be revealed for tomorrow, but as for the "non-city" map, it's called Snakewater,descrbed as "an action-packed control point map" from community author Toivo Sawen.

Completing a Two Cities Tour of Duty automatically grants you a Killstreak Kit, which you can apply to any weapon to transform it into a Killstreak weapon. The weapon can them be further upgraded to add cool visual effects to your weapon and eventually even your character. There's also a super rare chance of finding an Australium weapon, which, if they work anything like the super rare "Golden Wrenches," will turn your enemies to gold upon killing them.

Stay tuned for more news from the update's second day!