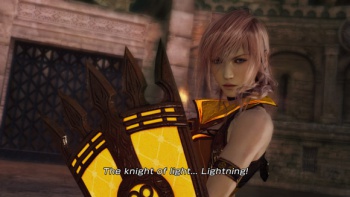 Japanese voice-overs in Lightning Returns: Final Fantasy XIII will be available as DLC, but it will be free for a limited time.

Ali Hillis voices Lightning in Japanese, giving her a strong, and often "no nonsense" attitude. Troy Baker, heard in many recent games such as The Last of Us and BioShock Infinite, lends his voice to Snow Villiers. The English cast of Final Fantasy XIII is a strong one, but the option to hear the Japanese voices is a nice addition for any fans who prefer the Japanese voices, and the pack also includes lip-synching to the Japanese audio. Lightning has a well-known voice actress in Japan. Maaya Sakamoto has voiced characters from many Japanese anime and videogames, such as Ouran High School Host Club (Haruhi Fujioka), Black Butler (Ciel Phantomhive), Final Fantasy X (Aerith Gainsborough), and Persona 3 (Aigis). She is also considered to be the official Japanese voice-over for Natalie Portman.

More videogames are including Japanese audio with English subtitles. Other JRPG Tales of Symphonia Chronicles will feature English and Japanese dual audio, so players can choose their preference. When this feature is included, it's generally a part of the game rather than offered as DLC, especially not paid DLC. Unfortunately, this is the route Square Enix has taken for Lightning Returns.

You can check out Maaya Sakamoto as Lightning in a recently posted 11-minute video.