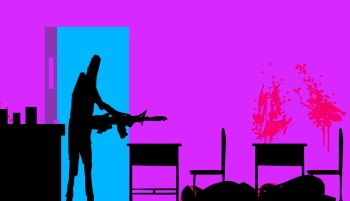 The Slaying of Sandy Hook, a game based on the Sandy Hook Elementary School massacre created by the maker of V-Tech Rampage, has inspired outrage from all corners of the political spectrum.

The 2012 mass murder at the Sandy Hook Elementary School in Newtown, Connecticut, had nothing to do with videogames, but as usual, games were drawn into it anyway. And now a game created by Ryan Lambourn and based on the events of the massacre has earned widespread condemnation from both gun rights and gun control advocates for "exploiting" the tragedy.

"I'm just horrified. I just don't understand, frankly, why anyone would think that the horrible tragedy that took place here in Sandy Hook would have any entertainment value," Newtown First Selectman Pat Llordra told CTPost.com. She said she's turned matter over the the local police and FBI for investigation.

"I find the exploitation of this unspeakable tragedy is just shocking," Democratic Senator Richard Blumenthal said separately. "From what I've heard and what's been shown to me, it's absolutely abhorrent. My hope is that it will be voluntarily taken down because it's offensive and hurtful."

The National Rifle Association described The Slaying of Sandy Hook as "reprehensible" but refused to comment further in order to avoid giving more attention to "this despicable excuse for a human being."

But the maker of the game claimed that the point is to draw attention to the need for worthwhile gun control laws in the U.S. "Here we are a year after the Sandy Hook shootings in which 26 people were killed, 20 of which were first-graders, and absolutely nothing positive has come out of it," he said. "I'm someone who rarely follows the news, so these updates have been a constant reminder of just how commonplace mass shootings and school shootings have become."

Lambourn is no stranger to controversy: Back in 2007 he created V-Tech Rampage, a Flash game based on the Virginia Tech massacre which drew similar ire, and told one of his few supporters on Twitter, "its not like I didnt know this would happen." But he also insisted that there's a serious message behind the game.

"these people love to tout their 'self-defense' statistics as the good of guns but when you actually look at what's defined as 'self-defense' its just one person killing another and having to believe their story because there's no alternative," he wrote. "right at the top of the declaration of independence everyone is equal, we all have inalienable rights, the very first of which is LIFE. the concept that taking life isn't encroaching these rights if done is self-defense is just wrong."

Senator Blumenthal's wish has been partially fulfilled, as Newgrounds has pulled the game, but it's still available through other sites. It is pretty graphic, as Flash games go, but it's also a very effective reminder of the horror of the real-life events. The Slaying of Sandy Hook ends with a tally of the students and teachers killed in the game, and also cites the actual Sandy Hook body count; and after having completed the game in the "Historical" mode, others open up, including a "Gun Control" mode in which the player must remove the AR-15 from a locked gun safe - and cannot.