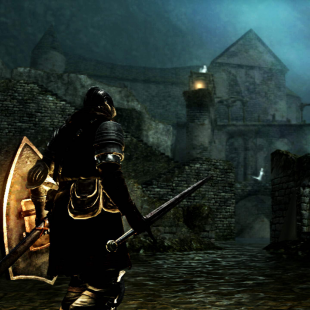 SCE president Shuhei Yoshida says the PS4 sharing and streaming options were influenced in part by the asynchronous connectivity of Demon's Souls and Dark Souls.

Arguably one of the niftiest bits of the PS4 are its built in sharing and streaming features that make it easy for gamers to show off their exploits (and blunders) to the gaming world. If you were at all curious as to what prompted Sony to invest in these features however, SCE president Shuhei Yoshida would point you to Dark Souls and its PS3-exclusive predecessor Demon's Souls.

Yoshida, who is an admitted fan of both Souls games, reiterated his love for them recently and affirmed that several of the ways they connected players "asynchronously" influenced the design of the PS4. "[Things] like leaving the message to other people asynchronously, so if you were connected - but not connected at the same time, all these things inspired us when we were designing the system features for PS4," he said. In particular, he credited "the sharing features" to his own love of watching people play Dark Souls on YouTube.

While the PS4 obviously wasn't designed just to suit the needs of one game, we're going to go ahead and say that if Sony did take cues from a title like Dark Souls, that it could have found worse inspirations. That in mind, here's hoping that Dark Souls II gets confirmed for a next-gen release so we can all take advantage of the PS4's sharing options to upload our many, many deaths to the internet.