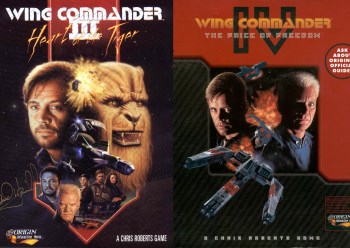 Funny thing about Wing Commander. I played and loved the first two games back in the day but when Origin announced that Maverick was being replaced by Luke Skywalker for Wing Commander 3, I walked away without a backward glance. I'll never know if the me of 1994 was cheated out of a memorable and perhaps even formative gaming experience, but I can say with confidence that the me of 2013 thinks he dodged a bullet.

The first thing you'll notice about Wing Commander 3: Heart of the Tiger is that it's desperate to be a movie. It comes at you with a cinematic intro that's probably as close to a theatrical experience as was possible in that era, which as it turns out is not very close at all. It is, in a word, ug-hug-hugly, and while it may not be entirely fair to hold visual quality against a 20-year-old game, there's no getting around it either. Characters up close are blocky and blotchy and the further you get away from them - across a room, say, instead of face-to-face - the more indistinguishable they become.

I'm picking on the graphics in part because, as mentioned, Wing Commander 3 tries very hard to be a movie and, being from 1994, that means live-action FMVs and lots of them. As you might expect, it's awful in every possible way: The dialog is worse than a George Lucas first draft and it manages to make a reasonably talented cast that includes Mark Hamill, John Rhys-Davies, Jason Bernard and Malcolm McDowell look like an overly-earnest drama class. The only one who really sells it is Ginger Lynn (yes, that Ginger Lynn) who plays a sex-kitten technical chief who Blair - he finally gets a name in this one - has the option to romance.

Every mission begins with the same FMV clip of Blair wrapping up the briefing and selecting a wingman, and then it's off into space to fly through checkpoints and blow up bad guys. Alas, there's nothing in the cockpit to save the experience; it's just as ugly outside as it is inside, pilot chatter is almost immediately repetitive and the awkward 3D ship animations and anemic audio utterly fail to generate any sense of excitement.

Wing Commander 4: The Price of Freedom manages to be both better and worse than its predecessor. The FMV sequences are much better, as they use actual sets rather than green-screens and run at a far higher resolution than those of WC3, but there also a lot more of them and unfortunately neither the script nor the acting is improved in the slightest. The in-flight graphics are better as well, as you'd expect, but in virtually every other way the two games are almost identical. It is, however, definitely the tougher of the two; I was able to breeze through WC3 missions with almost no effort, but that kind of lackadaisical approach to WC4 resulted in many quick deaths.

Between missions, both games will have you interact with various members of the cast by choosing either/or responses to conversational cues, and will branch off in different directions depending on the choices you make. But the choices are entirely binary and the results, when they aren't essentially meaningless, can be outright silly. Choosing to romance one of your two possible partners, for instance, and thereby scorning the other will cost you the services of either your tech chief or a wingman. Is this a military vessel or a flying frat house?

The GOG versions run flawlessly on Windows 7; Wing Commander 3 in DOSBox and Wing Commander 4 natively. But a smooth and painless setup can't make bad games better, and while these two might have seemed impressive back when everyone was still pretending that live-action FMV wasn't a god-awful idea, they just don't hold up today. The single-minded drive to make Wing Commander 3 and 4 more like movies ended up robbing them of the immersive magic that made Wing Commander 1 and 2 so great. These titles, comparatively, are perhaps best seen as nostalgia-tinged curiosities, reminders of an era in videogaming that's best left behind. That said, if you still want to give them a try, you'll find both Wing Commander 3: Heart of the Tiger and Wing Commander 4: The Price of Freedom at GOG for $5.99 each.

Come back next week for a final piece of Wing Commander coverage for the month of November. Next Saturday, we'll be looking at Wing Commander: Armada.