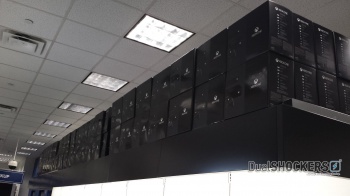 People are still able to find plenty of "Day One" Xbox One consoles even in the heart of New York City.

Last week saw the release of Microsoft's Xbox One, and after much celebration, the company announced that the machine was a runaway success, selling over a million units in 24 hours and selling out "at most retailers." Except, according to this report from Dual Shockers, they might not be quite as "sold out" as Microsoft claims.

Talking with a store employee at the Time Square Toys"R"Us store, right in the heart of New York City, the Dual Shockers reporter learned that the store still had "easily a few hundred" units left.

In the Midtown Manhattan Best Buy store on 5th avenue, he was told that there are still "a lot" of units left for sale, and even spied several rows of the "super limited" black "day one" Xbox Ones for sale.

NG4 user JuniorCE also took this picture of rows of day one Xbox Ones for sale at the West Hollywood Best Buy in Los Angeles.

On the other hand, both New York stores reported having absolutely no PS4s for sale, although it is still difficult to make a direct comparison, as the Best Buy clerk said that his store received less PS4 units than Xbox Ones.

We'll have to wait for the official sales data to confirm exactly how well the Xbox Sold, but the fact that you can still get day one edition consoles in the heart of one of the busiest cities in America is perhaps not a great sign.