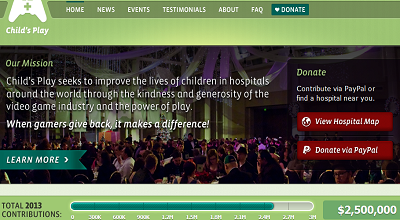 It's hard to believe that it's been ten years since the launch of Child's Play, the renowned charity which raises money to provide hardware and games for the enjoyment of sick children in hospitals. Since the charity's 2003 inception its network of hospitals has grown to include more than 90 facilities around the world and now also distributes games to domestic violence services to help give kids an escape to help them get through the turmoil coloring their lives.

Perhaps most impressive of all however, has been the massive turnout of contributors who have donated year after year to help make Child's Play a reality. In an announcement on its page, the organization revealed that in the ten years since it began, it has accumulated more than $20 million in donations. 2013 has seen people give more than $2.5 million dollars, with this year's Desert Bus fundraiser bringing in more than $520,000 alone.

"Fundraisers like Desert Bus exemplify why the Child's Play community is so remarkable: hundreds of hours of preparation, thousands participating in chat and viewing the stream, visitors, call-ins, auctions and giveaways," said Child's Play in a statement. "The comprehensive effort on the part of everyone involved will positively impact the lives of thousands of kids around the world for years to come." To make your own contribution to the Child's Play ongoing success, you can visit its official website.