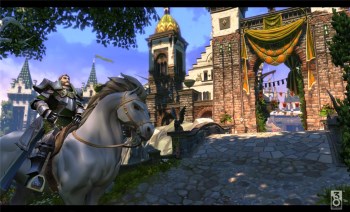 Curt Schilling won a few World Series rings last decade and then decided that qualified him to make videogames. And not just any videogame, but an epic, sweeping fantasy MMO - the sort of thing known for swallowing experienced and well-established studios wholesale. The results were ugly: The single-player RPG Kingdoms of Amalur: Reckoning holds a respectable 81 on Metacritic but 38 Studios is no more, Rhode Island is on the hook for about $100 million and Schilling's reputation is badly and quite likely irreparably tarnished.

In spite of all that, Schilling isn't willing to throw in the towel on it just yet. "If someone were to buy Amalur, put team back on it, it's a billion dollar franchise, 2 years later and still no ones done what we were doing," he wrote earlier today on Twitter.

If someone were to buy Amalur, put team back on it, it's a billion dollar franchise, 2 years later and still no ones done what we were doing— Curt Schilling (@gehrig38) November 26, 2013

He didn't elaborate on what 38 Studios was doing when it went under for the last time that nobody else has been able to duplicate, but his words nonetheless drew a rather heated response from Bleszinski, the former lead designer on Epic's hit Gears of War franchise. "Curt you can't just throw a bunch of bodies at it and attempt to make WoW and Skyrim. I wouldn't try to pitch the world series," he tweeted. "If you're putting together a band you don't open at an arena, you play shitty small venues and suck a lot first before building up."

"Didn't mean to be disrespectful, just stating the obvious," he added.

Obvious, but still a valid point: If 38 Studios had worked its way through the minors, so to speak, and paid some attention to sustainable growth, it might still be around and Amalur might actually be a lucrative property - maybe not a "billion dollars" lucrative, but at least as a durable franchise. Instead, it and everything else related to 38 Studios is going on the block in December, and will probably end up in the hands of an insurance company.