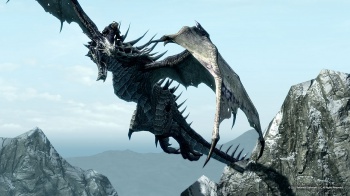 Get Skyrim and its two main expansions for $30, Tomb Raider for $15, plus one-day deals on Black Friday and Cyber Monday.

Black Friday is hitting a few days early over at Xbox Live, with a series of weeklong deals that will be available from today through Dec. 2. There's a total of 28 items, which include games, expansions and DLC, available now through Monday, so there's plenty to choose from. Haven't picked up Skyrim yet? You can grab it for $15, along with its Dawnguard DLC for $5 and the most recent Dragonborn DLC for $10. That's a total of $30, or half what it cost at launch two years ago. If you want to dig further back in Bethesda's gameography, Fallout 3 can be had for a paltry $7.50 and each one of its five DLC expansions is only $1.70. Other deals include this year's Tomb Raider for $15 and this summer's Metro: Last Light for just $25. The full list can be found on Major Nelson's site.

Major Nelson also lists one day sales taking place on Xbox Live during this year's Black Friday and Cyber Monday. Highlights from the Black Friday sale include Diablo III for 33 percent off (only for customers in America, Canada and Mexico), Rayman Legends for 50 percent off and WWE 2K14 for 33 percent off. Among the Cyber Monday deals are a bevy of acclaimed titles for 75 percent off. You can get The Witcher 2, Red Dead Redemption, Dark Souls, Far Cry 3: Blood Dragon and others all for just a quarter of their regular price. And if you want to show The Behemoth some love, Battleblock Theater will also have its price slashed by 67 percent.