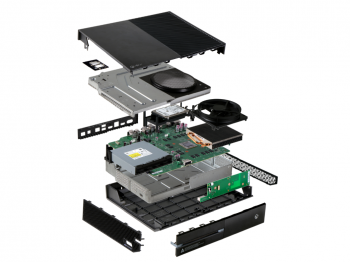 The Xbox One costs $100 more than its competitor, but where exactly is all that extra money going?

Now that both Sony and Microsoft's next-gen systems are on the market, there's only one logical thing to do. No, not play games and enjoy the next-gen experience - tear them apart and see what makes them tick! Research firm IHS opened up a PlayStation 4 and Xbox One to examine the internal components of each machine, and estimate how much it costs the manufacturers to produce the consoles. According to the firm's findings, the more expensive Xbox One costs about $90 more to build than the PS4.

The total costs of production for both systems were pretty close to the market price: the Xbox One costs roughly $471 to produce (including a controller and Kinect), and sells for $500 in stores. The PS4, meanwhile, costs Sony $381 to build, and sells for $400. Unsurprisingly, neither manufacturer is making much (if any) profit from console sales, especially once you subtract a cut for the retailers' shelf space.

As for the breakdown of component costs, the biggest contributor to the price difference in the Kinect unit, which is included with every Xbox One and has no equivalent in the PS4 package. Analysis indicates that the Kinect itself costs about $75 to produce. Microsoft spent an extra $10 on its AMD microprocessor when compared to the PS4's similar chip, though the PS4 spent $28 more on higher-end RAM. Interestingly, the Xbox One itself only costs about $332 when you add up all its parts: the extra $139 comes from the Kinect ($75), controller ($15), external power supply ($25), headset ($10), and assembly ($14).

At the end of the day, both consoles are pretty similar in raw power, but it's interesting to see how each of them got there.