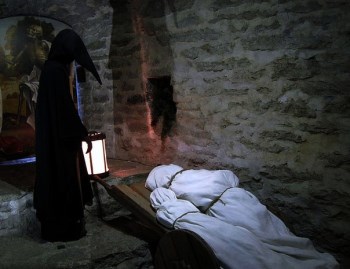 Pathologic, one of the most bizarre and unrelentingly Russian games ever made, might just be getting a modern-day remake.

Released in 2005, Pathologic is... hard to explain. It's a first-person survival horror game set in a village gripped by a deadly disease, playable from the perspective of one of three lead characters struggling to determine the cause of the plague. Attempting to describe it beyond that would inevitably do a disservice to the sheer strangeness of the thing, which is augmented (in a bad way) by a near-incomprehensible translation and the inevitable bugs.

I spent more than a few hours with it back in the day and I'm still not entirely sure what happened during any of it. Rock, Paper, Shotgun published a remarkably lengthy and in-depth look at Pathologic in 2008, boldly proclaiming it as "the single best and most important game that you've never played," and while I'm not sure I'd go quite that far, I do feel a certain excitement at the possibility of a modern-day remake that keeps Western audiences in mind.

The message posted by Pathologic developer Ice Pick Lodge on Russian social site VK is very roughly translated but does seem to suggest that a Kickstarter remake is at the very least being considered. "Friends. We initiate resuscitation Mora. Make this game will be very difficult. Magnitude of the task to which we swung far exceed our resources," it says. "Therefore, we will refer to your help whenever possible. first task that faces us - Kick training. We will need to shoot a few commercials for-page application."

As noted by RPS, "Mora" is a mistranslation of "Mopa," which it says is a short-form of the Russian title for the game, while "Kick training" appears to be a Google translate massacre of "Kickstarter." The message also asks for 40 to 50 people to take part in a live-action shoot this Saturday, presumably for the Kickstarter pitch video, as well as for contributions of fan art and people who are fluent in English and ready to talk about the game for the camera.

An uncaptioned image attached to the post has a very Pathologic-like look to it, giving further weight to the idea that something is cooking. And it's not as though Ice Pick Lodge isn't familiar with the ins and outs of Kickstarter: Its most recent project, the well-received Knock-Knock, was successfully Kickstarted in September 2012.