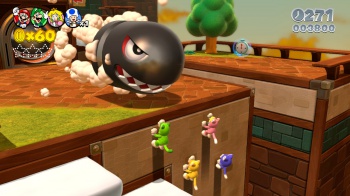 Super Mario 3D World only managed to move 106,967 units in its first week in Japan.

The numbers have come in for Nintendo's latest Mario title: Super Mario 3D World, and I'm afraid it's not looking good. The title has had the worst debut week of any 3D Mario game ever, managing to move only 106,967 units in Japan. For perspective, the fastest-selling Mario, Super Mario 3D World's 3DS cousin: Super Mario 3D Land, moved 344,698 units in it's first week.

Here's the full list of 3D Mario platformers, and their respective week one and lifetime sales for comparison:

It's worth noting that the Wii U currently has a smaller install base than the other Nintendo platforms have had in the past, but it's still not a good sign that even a Mario game (and a fantastic Mario game at that) still can't sell consoles.

These figures are also solely for Japan, so the excuse of "well, it had to compete against the launch of next-gen" doesn't fly either, as neither the PS4 or the Xbox One will launch in the region until next year.