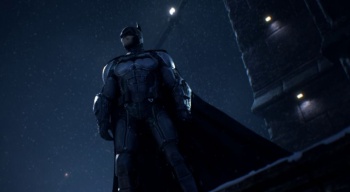 The "Initiation" DLC looks at Bruce Wayne's backstory as it chronicles his trials in a monastery full of ninjas.

Those of you itching for more Dark Knight action may not have to wait too much longer, as Warner Bros. Games vice president Ames Kirshen has confirmed that DLC for Batman: Arkham Origins "with a little bit of narrative" will drop next month. It's called the "Initiation Pack," and it's all about Bruce Wayne's backstory. You know, when he was a ninja.

Kirshen described the DLC as a "new kind of challenge map pack that's got a little bit of a narrative to it", and concerns the adventures of a young Bruce Wayne in a monastery full of ninja.

To help tide you over until an actual release date and more information is given, Warner Bros. has also released three new non-story DLC packs. The first, "The Infinite Earths Skins Pack" contains the following six new costumes:

The other two packs are the "Black Mask Challenge Pack", which was previously available only as a pre-order bonus, and the "Online Supply Drop #1", which offers additional multiplayer clothing and weapons.