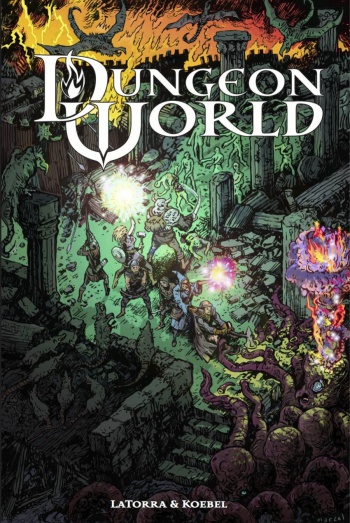 Thanksgiving and Black Friday deals are pretty common right now, with Steam, GOG.com, and even the Humble Store each offering their own unique variations. Now tabletop players can get into the action with Bundle of Holding's Indie Cornucopia. If you missed any previous bundles, just know that Bundle of Holding is to tabletop gaming what the Humble Bundle is to electronic: A limited time, pay-what-you-want deal on a unique collection of pen-and-paper RPGs. And this time, Bundle of Holding is getting into the Black Friday market with what it calls "the largest, the most impressive, the most spectacular [Bundle] we've ever offered".

Unlike Bundle of Holding's recent Old-School revival, this particular package offers modern indie games in the form of seven popular ebooks. The deal starts out right with Apocalypse World, D. Vincent Baker's award-winning game about carving out a life in the post-apocalypse. Next there's Dungeon World, a love letter to old-school fantasy games that uses the Apocalypse World system. Adventures on Dungeon Planet builds onto Dungeon World with a science-fiction supplement, pushing your game in a universe of 20th Century pulp sensibilities. Saga of the Icelanders, meanwhile, applies Apocalypse World mechanics to 10th Century Viking settlers, with an emphasis on culture and historical accuracy.

Moving away from Apocalypse World rules, Perfect dives into steampunk dystopias, focusing on criminals being investigated by the government. Speaking of criminals, Durance is a science-fiction game about the inhabitants of an off-world penal colony written by Fiasco's Jason Morningstar. Finally, Nova Praxis is a post-singularity game of transhuman sci-fi, set after augmented humans abandoned Earth to colonize the stars.

As with any Bundle of Holding, we can expect additional games to be added over the course its remaining five days. Even if that's not the case, Dungeon World alone is worth paying attention to, as it currently sits at #8 of 100 on DriveThruRPG's Top Products list. Combined with the rest of the collection, you'll have no shortage of modern tabletop games to play once you've taken stock of your many holiday purchases.