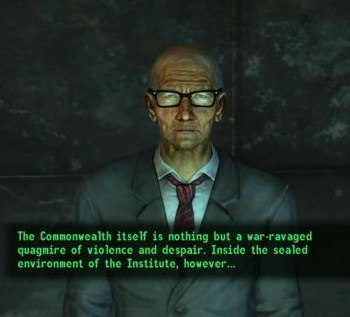 The countdown to nuclear winter at thesurvivor2299.com hit zero yesterday and while we didn't get the much-hoped-for confirmation from Bethesda that this is in fact an Official Fallout Thing, the tale it's indirectly telling grew a whole lot more interesting. The "Nuclear winter is coming" message was replaced by "Nuclear winter has come," preceded by an encoded, two-line message that the great minds of Reddit had unraveled in no time.

The first five words in the message are actually the decoding instructions, which when followed translates into "The Institute is sealed. They won't help us. I'm heading to Black Row. -TBNLS 5120-." As another Redditor pointed out, Fallout 3 NPC Dr. Zimmer mentions "the sealed environment of the Institute" to the player at one point, although what Black Row is and what TNBLS 5120 references remain a mystery.

The morse code messages have also changed at least three times since the evening of December 1. Around 4 pm EST (and these times and translations are recorded by others, so may not be pinpoint-precise), a call for help went out saying, "Calling all stations, this is Overseer 119 emergency enemy unknown, SOS. Vault 119 Quabbin 7667, repeat, SOS, Vault 119 Quabbin 7667 enemy unknown." About an hour later it changed to the more urgent, "Calling all stations, this is Vault Overseer 119, anybody near Quabbin? SOS Vault door breach, repeat, SOS Vault door breach, enemy unknown, level 1, 2, and 3 gone, survivors on secure location level 4."

A little before midnight the situation grew even more dire, as the message changed again to, "Calling all stations, this is Vault 119 SOS level 4 under attack, Overseer is dead, repeat, SOS level 4 under attack, Overseer is dead. We won't make it." Finally, later this morning came a report of the aftermath, delivered by an unknown party, which continues to repeat at the time of writing - although two interpretations of the code suggest two very different possible events.

It's gripping stuff either way, and while a lot of people are very cynical about countdowns to announcements, I think they're a lot of fun, especially when they're as well done as this. I'll be disappointed as hell if it turns out to be a hoax, but equally impressed by the amount of work put into it just to mess with Fallout fans. We'll find out which it is in about nine days.