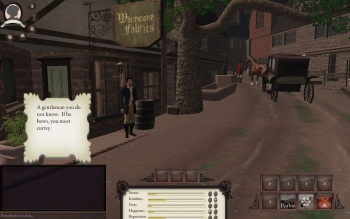 It is a truth universally acknowledged that gamers in possession of good fortunes must support a Kickstarter. So they did.

Ever, Jane, the Jane Austen-inspired MMO that debuted on Kickstarter, is certainly one of the more unique game ideas warranting a crowdfunding campaign. Instead of offering an MMO fantasy world of elves and magic, Ever, Jane takes place in regency period England as characters improve their wealth and standing by attending social events, playing mini-games, or simply spreading gossip about rivals. It's a original concept that even drew attention from those who don't follow MMOs, which gives it a good chance of becoming a finished product. With just a day left on the clock, Ever, Jane exceeded its $100,000 goal by $9,000, compiled across exactly 1600 backers.

3 Turn Productions will be tweaking one aspect of Ever, Jane's proposed gameplay: The hierarchical subscription model. With this system, players could pay into a preferred subscription tier, automatically lifting them into higher strata of English gentry. After hearing concerns that players might miss out on content simply because they cannot pay, project head Judy L. Tyrer stated that free players will be allowed to climb Ever, Jane's social ladder.

"This is not a zero sum game so 'winning' becomes self defined," Tyrer writes. "Still, there is a difference in game play and it is reasonable for someone to want to play a Baronet and yet not be able to sustain that subscription level financially in the real world. So we will be allowing even the free-to-play players to eventually, and through a great deal of in-game effort, rise as far up the hierarchy as anyone paying a higher subscription rate would be able to.

"It may take a F2P player much longer to achieve what someone can buy a subscription for now. But the full experience of the game will be available."

With thanks to GundamSentinel for the rather appropriate Kickstarter joke.

Pride and Prejudice and Zombies - Can it Clear an Exceptionally Low Bar? Marter 6 Comments
Comments on