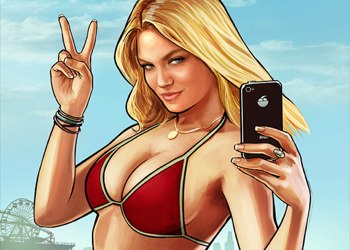 Lindsay Lohan is reportedly preparing to launch a lawsuit against Rockstar Games for using her likeness in Grand Theft Auto V without permission.

Gossip site TMZ is reporting that Lindsay Lohan, a one-time child star who in recent years has become better known for criminal behavior, repeated trips to rehab and presumably-satirical appearances as herself in television shows and low-budget movies, is planning to file a lawsuit against Rockstar Games for misappropriating her likeness for Grand Theft Auto V. According to the site, Lohan's lawyers are currently putting together a suit "demanding Rockstar Games pay some serious money for using Lindsay's image in the game."

GTA V features a couple of missions involving a Lohan "look-alike," one in which she seeks help eluding the paparazzi and returning home, and another where she appears at a hotel resembling the Chateau Marmont in West Hollywood, a real-life Lohan hangout. The bikini model on the cover also looks "Linday-ish," although it was reported by NowGamer in November 2012 that the image was actually based on model Shelby Welinder.

It's all just a rumor at this point, but it's hard to deny that Rockstar's use of her likeness is overt.

Lindsay Lohan is suing the makers of GTA V, claiming that they stole her likeness for a character. She is 100% right. pic.twitter.com/fzO3JJVUJq— Brian Altano (@agentbizzle) December 2, 2013

The Big Picture: Off Target - Don't Censor Me Part 2 MovieBob 216 Comments
Comments on