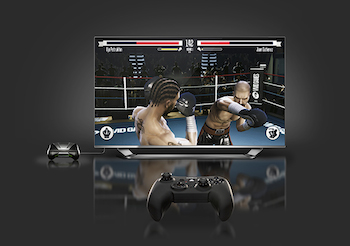 A new update can give the Nvidia Shield a substantial boost in the streaming department, among other things.

When I think about how software updates make hardware better, I think of maintenance and fixing bugs, not increasing functionality; but that's just what the newest patch for the Nvidia Shield does. The patch, which launched today, allows the Android-based handheld to stream PC games to a TV at 1080p, running at 60 frames per second, according to a post the Nvidia blog.

The upgrade builds on the Shield's new "console mode," which arrived with a patch released in October. In console mode, players can stream and Android and PC games to a TV via HDMI and play with a bluetooth controller.

Not everyone will be able to run games at the new, higher frame rate. In order for the Shield work at its maximum settings, the PC the Shield streams from must use a Kepler-class GTX graphics card and an ethernet connection, according to Nvidia. Otherwise, the maximum resolution/framerate ratio for streaming via the Shield will still be 720p at 60 frames per second.

At the moment, only a handful of the 63 PC games that can utilize the Shield's Gamestream feature are officially support the new resolution, including Assassin's Creed IV: Black Flag, Battlefield 4, Crysis 3, Bioshock Infinite, Borderlands 2, Batman: Arkham Origins and Skyrim. Nvidia expects to add more games to the list on a weekly basis.

The new update also builds on the device's system-level button-mapping, allowing players to move motion-based controls to any button or analog stick, as well as a user rating system for player-designed control schemes.