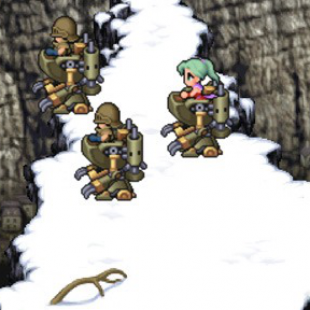 Square Enix has released a pair of screenshots to demonstrate the visual changes being made to Final Fantasy VI.

Back in October Square Enix revealed that it had plans to "remake" Final Fantasy VI for iOS and Android. While the new version would essentially be the same game in terms of story and mechanics, the company promised that it would be tweaking the difficulty to reduce level grinding while also investing in new visuals similar to what it did with the mobile edition of Final Fantasy V.

Well, Square Enix has finally released some sample screens from the new game and I don't quite know how I feel about them. Being an enormous fan of the original SNES game (we're talking favorite game territory) I expected to loathe the new visuals, especially since I didn't like the looks of the Final Fantasy V mobile game. That said, I'm looking at the new images and not hating everything. The environments, for instance, actually look kind nice, almost like the developers just took the SNES versions, smoothed them out and changed the proportions a bit.

Where we get into the hazier territory for me, is the character sprites. While I wouldn't say the new sprites look terrible, there's just something not right about them. They're a bit too smooth in my opinion, almost to the point of looking flat. Terra's hair especially bothers me for some reason. Of course, I have long been one of those people who thinks Final Fantasy VI is perfect in its original form, so maybe it just comes to down my inability to fully accept any changes to a game I hold very dearly. What do you guys think? Does it look to you like Square Enix is improving Final Fantasy VI, or is it stomping on a classic with these new visuals?