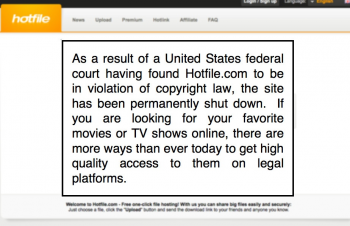 Hotfile's safe harbor defense collapsed, and after that there was no hope.

If you're one of the many who gets their movies from Hotfile, you may have noticed that the site's shut down. The file locker has closed its virtual doors after losing a major legal battle with the MPAA. Hotfile has settled rather than endure a legal rout, and will pay an $80 million fine to Hollywood. It has also been ordered to cease operations until it implements copyright filtering technologies.

Hotfile relied on the safe harbor provisions of the Digital Millennium Copyright Act, arguing that it was all right so long as it removed offending materials when notified of a problem. However it failed to demonstrate that it had done anything substantial to prevent infringement. Judge Kathleen Williams described the extent of infringement as "staggering" but, despite receiving 8 million infringement notices for 5 million users, Hotfile had only terminated the accounts of 43 by the time the lawsuit was filed.

Hotfile launched in 2009 and has 5.3 million reigistered users, which - given the estimated 90.2% infringing or highly infringing Hotfile downloads made each day - suggests that the vast majority of those users are involved in copyright infringement.

Hotfile works by 'hiding' its files in plain sight, providing a link with no file name or description. It's up to the user to share links and titles, but each file is unsecured, available to anyone with a net connection. A file can be downloaded multiple times, with no restriction. The MPAA, in papers filed prior to the trial, has described it as "indistinguishable" from Megaupload. Kim Dotcom has yet to have his extradition case dealt with.

"This judgment by the court is another important step toward protecting an Internet that works for everyone," says the MPAA's Chris Dodd. "Sites like Hotfile that illegally profit off of the creativity and hard work of others do a serious disservice to audiences, who deserve high-quality, legitimate viewing experiences online."

The More You Know MovieBob 31 Comments

The King and the Donkey Spanner 3 Comments