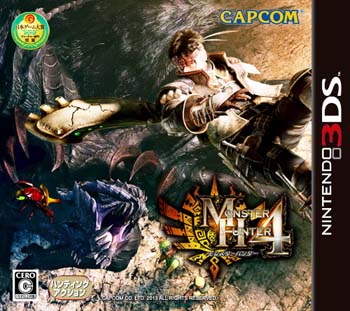 Shipments of Monster Hunter 4 have topped four million, Capcom announced today. Despite its great success within Japan, Capcom has made no announcements on whether it will bring the game to western territories.

The 3DS game launched in Japan in September and sold two million units in just four days. Capcom marketed the game through events like the "Monster Hunter Festa '13" in five cities across Japan; 48,500 attended. Celebrities promoted the game in TV commercials as well. Another event, "Monster Hunter 4 in Nanja Town" in Tokyo, is still ongoing. Starting February 2014, Capcom and Universal Studios Japan will present "Monster Hunter the Real 2014." So yes, Monster Hunter is doing very well for itself. As of today, the series, first launched in 2004 for the PlayStation 2, has shipped 28 million units. This number includes sales of the downloadable version.

That's good news for Capcom and Monster Hunter fans, but the good numbers also show that games for the 3DS have been selling well. Animal Crossing: New Leaf sold over 6 million units from Nov. 2012 to September worldwide, and Pokemon X and Y sold four million units within just a few days of its launch. Even if Nintendo is struggling to market the Wii U to consumers, the 3DS is the company's winner.

Western fans hoping to play Monster Hunter 4 will have to keep waiting for an announcement of western release - if one ever comes.