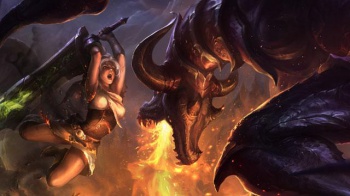 The contract for the fourth season of Riot's League of Legends Championship Series says players may not stream games including Dota 2, Hearthstone, StarCraft and many others.

The final touches are being put on the new season of the League of Legends Championship Series, and that means new contracts for all and sundry. But a copy of the new contract obtained by onGamers has a number of rather heavy restrictions on what players are allowed to play for public consumption.

The body of the contract doesn't explicitly state that "streaming" is forbidden but the above comes from a section entitled "Sponsorship and Streaming Restricted List," which strongly suggests that Riot Games views streaming as a form of advertising. OnGamers says "several" team reps it contacted have confirmed that the contract is real, but neither Riot Games nor Smite developer Hi-Rez Studios would comment.