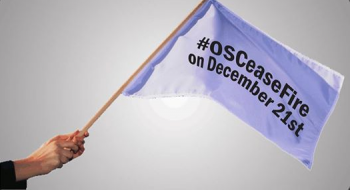 GamerFitNation's asking for your support, for another day of virtual non-violence.

GamerFitNation's organizing another shooter cease fire, in memory of Sandy Hook. Last time it did this, more than 3,000 people participated, and stopped playing shooters for a day. Now Antwand Pearman's hoping to make it an annual event.

"We decided to do it again this year because there have been lots of issues with gun violence," says Pearman, "so we wanted to make it an annual event in remembrance of those who lost their lives to violence." The Facebook campaign asks participants to get involved from 12am Friday/Saturday night to 12am the following day, and to spread the word via social networks with the hashtag #OSCeaseFire.

"It's about us as gamers coming together to do something positive," says Pearman. "I'm not worried or concerned. I feel like we should just do something because it's right, not because it's politically-correct."