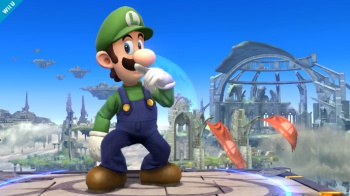 But for some of us, the Year of Luigi will never end -- it will become the Era of Luigi.

Nintendo first announced on Feb. 14 that 2013 would be the Year of Luigi. The company missed all of January, so it's only appropriate that Luigi's celebration continues in January 2014. Reggie Fils-Aime, president and COO of Nintendo of America, confirmed to Siliconera that the Year of Luigi is not over yet.

"There are some Year of Luigi activities that will continue into 2014," Fils-Aime said, "including some of the special products that we've launched (the Luigi remote and the Mario and Luigi 3DS XL) -- so there will be some Luigi products to carry the Luigi banner into the next calendar year."

So far, Nintendo has promoted some products and games featuring Luigi in celebration of the underappreciated younger brother of Mario. Including the limited edition 3DS XL and remote Fils-Aime mentioned, this year we've seen the DLC New Super Luigi U and Luigi's Mansion: Dark Moon, along with a 3DS bundle of the game. Luigi even appeared in Chicago and on the city's L train.

Despite all of this, Luigi is still the underappreciated plumber. It would be nice to see some more games in which Luigi is the starring character rather than placing him second to Mario. There's still time for the elusive Luigi 3DS XL seen in Japan and Europe to make it to North America. What events Nintendo has planned to end the Year of Luigi is up in the air, but let it be known that some of us will not stop celebrating the green plumber. Let's start the Era of Luigi.