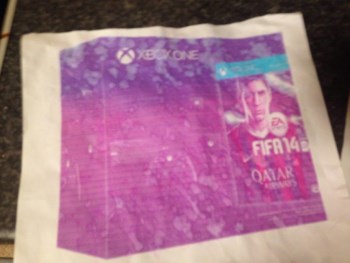 A U.K. teenager is "furious" after paying $735 for a picture of an Xbox One on eBay.

Peter Clatworthy, a 19-year-old from Nottingham in the U.K., thought he'd purchased an Xbox One on eBay for £450 - about $735 - for his four-year-old son. What he received, however, was a photo of an Xbox One with "Thank you for your purchase!" written on the back. He was, of course, outraged.

"I looked at the seller's feedback and there was nothing negative. I bought it there and then because I thought it was a good deal," he told the Nottingham Post. "It's obvious now I've been conned out of my money."

Except it wasn't entirely a con: Clatworthy acknowledged that the eBay listing stated that the item was in fact a photograph. But because it was in the proper category, he thought it was legit and so went ahead with the purchase.

Luckily for Clatworthy, because the photo was listed in the incorrect category (and, I would guess, because of all the attention the matter has received), eBay has issued him a full refund via PayPal, and also banned the seller from the site. An eBay representative noted that PayPal guarantees a refund if a product doesn't match its description or gets lost in the mail and added, "Our main tips for buying online generally this Christmas is make sure you're getting a good deal, know who you're dealing with and protect your personal and financial information."

And, you know, maybe pay a little attention to what it is you're actually buying.