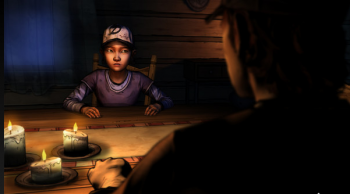 Telltale's new season is out in time for Christmas, and there are some preorder deals you may want to look at.

The Walking Dead Season Two, featuring Clem, Omid, and maybe some folks from 400 Days, is out December 17th. This reveal comes to you courtesy of Steam, which - as you might have guessed - has some pre-order savings available now. The season's 10% off, at $22.49; it'll be $24.99 at retail.

Telltale's running a similar preorder over on its own page, with an added bonus: the collector's edition DVD, which can be yours for only shipping and handling, if you buy a season pass from Telltale. Telltale has confirmed that this offer extends to overseas purchasers, so if you're the sort that just can't live without the DVD, better get your credit card out.

No word yet on availability on other platforms. Here's hoping the mobile version will be out ASAP!