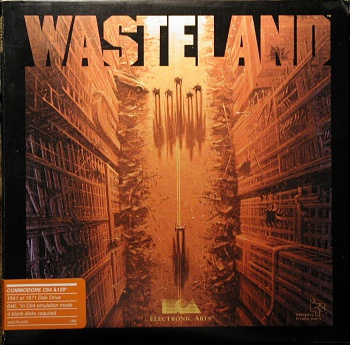 As we head into December Good Old Reviews will be delving back into history to take a look at PC role-playing classics, starting with inXile's Wasteland.

Like many gamers who grew up in the 90s, I never heard of Wasteland until its sequel became a Kickstarter success story last year. Regardless, once I actually knew what it was, everything I read seemed highly promising. A post-apocalypse game from the team that created Fallout? A persistent world that changed based on your actions? Topping it off, inXile Entertainment announced it would even re-release the original Wasteland for modern systems.

Well, the new edition has been out at GOG for just over a month, giving players like me the chance to experience it for the first time. The good news, if you adored the 1988 classic, is that the re-release is almost identical to the original with only a few refinements and updates. The bad news, if this is your first time in Wasteland, is that you are about to get smacked down by unintuitive gameplay and a brutal difficulty curve. If you can get past the initial pummeling however, you'll understand why Wasteland was such an inspiration to later post-apocalypse games, and you might get even more excited for Wasteland 2.

Wasteland is set in a post-apocalyptic 2087, almost 90 years after a nuclear war destroyed the American heartland. You control a unit of Desert Rangers, the military remnant of the American Southwest that maintains order among surrounding civilian settlements. As your party patrols the wastes, you'll face disfigured mutants, battle-hardened survivors, and even robotic soldiers, slowly uncovering a new enemy threatening to finish the job World War III started.

Let's get this out of the way: Unless you've prepared yourself using a game manual, player's guide, or walkthrough, you will be defeated by bunnies in the first fifteen minutes. Sure, they're armored bunnies, horribly mutated by wasteland radiation, but bunnies nonetheless. Fallout's tradition of putting player characters on an equal footing with weaker animal enemies clearly began here, and you're going to lose a few battles before finally getting the hang of things. Also, since Wasteland uses one save file per playthrough, the autosave might lock you into an unwinnable battle if you enter the wrong location unprepared, bringing the game to an early end. That's actually an improvement however, over the 1988 release which used a permanent save file for the entire game that couldn't be reset without copying the original disc.

On the bright side, Wasteland is more forgiving than Fallout in terms of player fatalities. During combat, Rangers are far more likely to be knocked out than killed or mortally wounded. Critical hits can cause characters to bleed out without medical intervention but, more often than not, they'll wake up after a few rounds and slowly heal themselves. And if a teammate is killed, you can return to the Ranger Center and roll replacement party members as long as one character survives the journey. That said, you sometimes might want player characters to die just to bring combat to a close. Your Rangers can be knocked out multiple times in a row, often rising with 1 HP just to get slapped down again, until you escape or someone finally lands a critical hit and finishes the fight. With some encounters offering a dozen foes or more, this can take a very long time, during which you can't save or quit.

If all of this talk of encounters, rolling, and critical hits sounds similar to an tabletop game, that's completely intentional. Wasteland's mechanics are directly lifted from a pen-and-paper RPG system, so gameplay often feels like you're just choosing actions and letting a GM roll dice for you. Each party member has randomly rolled attributes, uniquely tailored skill sets, and manages their own money and inventories. Characters can even split from the group to flank enemies in combat, or speak privately with NPCs that respond to nationality or gender. In fact, Wasteland could easily be played as a local multiplayer RPG, with four players squeezed around the screen, issuing orders to their individual characters. If Wasteland were any closer to its tabletop roots, you would just be rolling physical dice to resolve combat encounters.

Considering the technical limitations games were dealing with in 1988, the emphasis on pen-and-paper rules is actually a huge benefit. To save space on art assets, text descriptions are used to describe the world, set the mood, report combat results, and drive the plot forward. Even with the text-heavy focus, the original game couldn't display certain lengthy expositions, so Interplay provided a physical book with in-game instructions to read at certain junctures. Thankfully, this re-release has no such limitations and incorporates this text directly into the game as narrative voice-overs, although GOG has included a PDF copy if you prefer the classic style.

Minor tweaks and improvements aside, Wasteland's content and gameplay are largely unchanged. That's great for fans and RPG purists, but can be pretty confusing for new players. There's a big disconnect between most of what the game's text describes and what shows up in the game's visuals. Settlements will seem devoid of life, even as the story explains that entire communities live in these regions. If NPCs do appear en masse, they all use the same character avatar, making it difficult to decide who you should be talking to, let alone flanking in combat. You'll adjust, but it really makes one realize how dependent we've become on technologies that render everything on screen in fine detail.

Today, Wasteland has more significance as a historical artifact than as a game you play casually for some afternoon entertainment. Its impact on the medium is unquestionable, but it requires a significant amount of patience to complete, especially when adjusting to the old-school mechanics. That's not to say Wasteland is bad; far from it. Once you've learned how the system works, it's very satisfying to explore or unload bullets into assembled enemy forces. That said, without the proper mindset Wasteland can seem like more of a historical artifact laying the foundation for other games to follow, than a fun experience all its own.

Come back next Thursday for an early edition Good Old Review of Fallout.