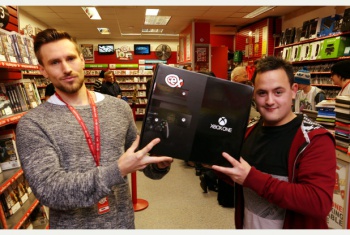 The moral of this story is... huh. Stupidity gets rewarded?

Remember Peter Clatworth, that unfortunate young lad who fell hook, line and sinker for one of the oldest eBay scams in the book, and forked over £450 ($735) for a picture of an Xbox One? We all had a good giggle over that one, and because of all the media attention he got, eBay did end up offering him a full refund via PayPal.

But the teenager still didn't have his Xbox One, and was about to upset his four-year-old son (whom he claimed to have been originally trying to purchase the console for) on Christmas. Luckily, UK retailer CeX has swooped in to save the day, offering Clatworthy a free Xbox One console.

Staff at CeX's store in Exchange Walk, Nottingham city center, presented him with the console on Saturday. "I'm just overwhelmed by the reaction to the story," said Clatworthy. "All I wanted was a refund. I cannot believe this."

The store's assistant manager, David Draycott, who handed Clatworthy the console, said, "We as a company are always looking to do a good thing for somebody. Hopefully Peter and his son will both be able to enjoy this together."

When Clatworthy initially made the purchase, he acknowledged that the eBay listing stated that the item was in fact a photograph, but because it was in the proper category, he thought it was legit and so went ahead with the purchase.

So what's the lesson that we take home from this? If he had just gotten a refund, he would have learned a harmless yet valuable life lesson about eBay scams. But the fact that he was also given a free console in the end? I don't know what to make of this. How about you guys?