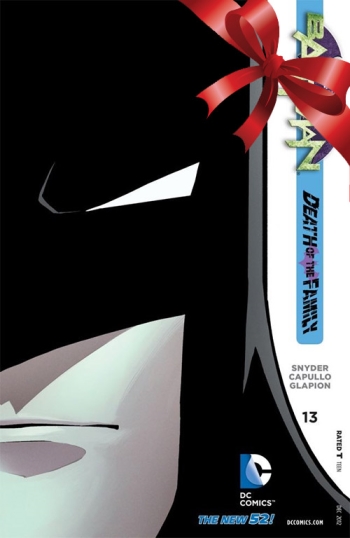 Starting today, digital comics platform ComiXology will give away one free comic each day for twelve days.

Forget nine pipers piping and partridges in a pear tree. To celebrate the holidays, ComiXology is handing out free digital comics from now until December 20. Every day for twelve days, ComiXology will release one new comic book. Each comic will be available at no charge for 24 hours. ComiXology users can also give the comics as gifts to friends and family, at no cost (ComiXology accounts are free). The first gift, released today, is Batman #13. Penned by Scott Snyder and illustrated by Greg Capullo, Batman #13 begins the "Death of the Family" story, featuring the Joker's return to Gotham after crippling Batgirl and killing Robin. Each comic will be revealed on the ComiXology website.

John D. Roberts, ComiXology co-founder, announced the sale in a press release. "Over the course of these 12 days we're making holiday giving easier than it's ever been," says Roberts. "These twelve days aren't just to give back to the fans that have made ComiXology so great, but also to let those fans share the love of comics with everyone they know."

ComiXology has done large giveaways before, though they haven't always gone perfectly. In March 2013, a giveaway of 700 free comics from Marvel crashed the ComiXology site for several days. The giveaway was later revamped to ensure that the ComiXology servers would not be overloaded.

The daily gifts look like a great way to pick up some interesting issues and maybe discover a series or two. I might even be inspired to sing some Batman-themed Christmas carols. How does Jingle Bells go again?