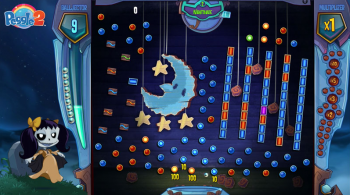 PopCap says a free update to Peggle 2 that will add a multiplayer "Duels" mode for both local and online gameplay is coming soon.

Peggle 2 launched yesterday as a timed exclusive for the Xbox One and while it was essentially more of the same (which isn't necessarily a bad thing), one notable component was missing: multiplayer "Duels." Today, however, producer Jared Neuss confirmed that it is on the way, and it won't cost a penny.

"While I can't reveal too much, I'm happy to announce that we're currently focused on bringing you a multiplayer mode that may sound familiar to Peggle veterans: Duels! This new mode will enable players to compete against each other, in the same room or across the Internet, head-to-head on the same board," wrote on Facebook. "We loved Duel mode in the original Peggle and can't wait to bring it into the updated world of Peggle 2!"

It's the sort of statement that might make one wonder why, if they loved it so much, they didn't wait and just include it in the world of Peggle 2, but in any event Neuss said the multiplayer mode will be released as soon as possible and will be entirely free. He also promised "lots of surprises" for the future and regular updates to the game, "to expand and add to the world we've built."