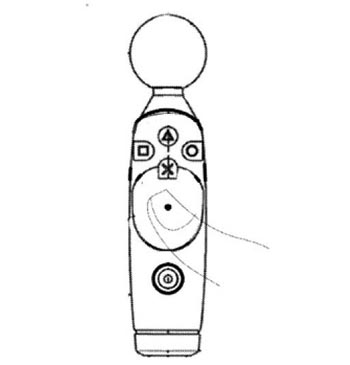 The patented device appears to be a new PlayStation Move controller.

Sony filed a patent for a "Flat Joystick Controller" in June 2012. Published earlier this month in Free Patents Online, the patent depicts a controller that looks similar to the PlayStation Move peripheral, but this one has a different button layout and a touch surface.

The patent filing states, "a touch surface is disposed on one side of the handle. The touch surface has an indicator that is identified by a surface characteristic on the touch surface. The touch surface provides an area for receiving directionality control in response to interfacing by a finger of a user." Important to note is that PS4's DualShock 4 has a touch pad. The PS4 supports the PlayStation Move, but there has been such little talk of it that there probably won't be many games making use of it.

The proposed multi-positional controller solves a problem inherent in a joystick you swing around: you can't take your thumb away from where it is to press a button. The thumb both needs to support the joystick and provide input. The patent reads:

Judging by the lack of overall support for PlayStation Move, this controller may never be developed for consumer use.