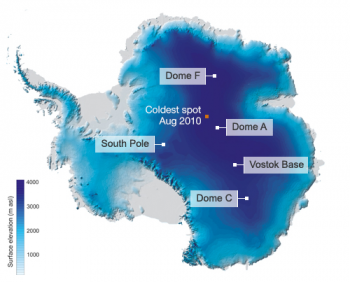 Antarctica: home of the Mountains of Madness, and also the coldest spot there is.

August 10th, 2010 is the date, and -93.2 Celsius (or -135.8F) is the temperature: the record-breaking coldest spot on Earth has been found, by satellite. Yes, it's in Antarctica, and beats the previous low, recorded at Russia's Vostok Base, by several degrees Celsius. The science team which made this announcement believes that an even colder figure will be found, as it goes through the reams of available satellite data.

The coldest moments, the team discovered, occur in the winter months at high elevation, when dry and clear air conditions allow heat to be efficiently shed out into space. The very coldest spots tend to be found, not at mountain ridge crests, but slightly down the slope, in pockets where chilled air flows and pools.

"If you were standing in one of these places, you'd hardly notice you were in a topographic low - it's that gentle and that shallow. But it's enough to trap this air," says Dr Ted Scambos, who likens the experience as the closest thing to being on another planet that a human can encounter.

The cold spots along those Antarctic peaks run in a line between Dome Argus and Dome Fuji, A and F on the map. They all reach somewhere between -92 and -94 Celsius. The coldest spot on earth was recorded at a latitude of 81.8 degrees South and a longitude of 59.3 degrees East, at an elevation of about 3,900m.