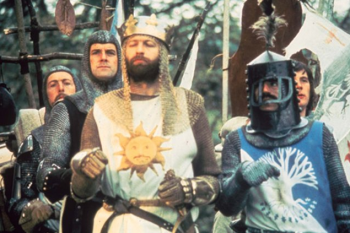 Image Source: Monty Python and the Holy Grail via IMDB

And Robin Williams is his dog. No, really.

Simon Pegg, he of the Cornettos, is set to join the surviving Monty Pythons in their latest sci-fi comedy movie, Absolutely Anything. Pegg will play Neil Clarke, a high school teacher gifted with strange powers by alien beings. The Pythons - John Cleese, Terry Gilliam, Terry Jones, Michael Palin - play the aliens, and Robin Williams is Pegg's dog. Not even joking about that last one.

"As someone whose love of comedy was hugely informed by Monty Python, the chance to work with Terry was a gift," says Pegg. "Meeting your heroes is one thing - working with them is something else."

That particular Terry is Jones, who will direct as well as perform. Pegg, says Jones, "is the absolutely perfect Neil;" high praise from a Python, which must have sent Pegg over the moon.

Absolutely Anything will start filming in London, March 23rd 2014.