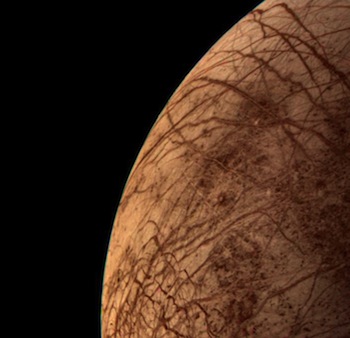 New evidence pretty much confirms the existence of a liquid ocean on Jupiter's moon.

Remember the Hubble telescope? Even though it was built with SNES-era technology, it's working just fine (much like your SNES, I bet). Recently, scientists have been using the massive device to plumb the depths of our own solar system. The moons of Jupiter have always been interesting candidates for life and habitation. Now there's new evidence that Europa has a subsurface ocean, as the Hubble has reportedly captured images of huge geysers of water on its south pole that might reach more than 100 miles high into the cold, thin atmosphere.

Scientists have long suspected the existence of an ocean hidden under the surface of Europa, and an obvious tell-tale sign like this pretty much gives it away. "If there's a geyser 200 kilometers tall, and you could fly a spacecraft through it and sample the water coming out from Europa, that would be phenomenal," said NASA's John Grunsfeld. "What if there are organics in it? That's getting to the question of 'Are we alone in the universe?'"

This isn't the first time the Hubble's looked at Europa. Earlier last year, all that it saw were the occasional spots of hydrogen and oxygen. The leading theory is that huge tidal forces from Jupiter's enormous gravity are the cause behind these spectacular displays. Strong evidence like this do a lot to bump Europa up on the list of candidates for future robotic missions, assuming they could get the funding.