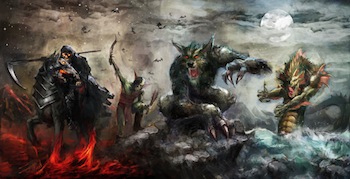 Before trying to Kickstart a game, make sure you own the rights first.

The indie startup Phantasm Studios had a dream: reboot the classic Ghosts 'n Goblins, but with modern touches. After all, Dark Souls showed that there's a market for brutal, soul-rending games, right? So, it looked to Kickstarter to breath life into the project, entitled Ghosts 'N Goblins - Demon World. The only trick was that it didn't actually own the rights to the franchise. Predictably, Capcom has swooped in and skewered the whole project.

Apparently, Phantasm's idea was to go ahead and fund the game, and ask Capcom for permission later. If that fell through, it'd just change the names, reasoning that Miyamoto did it back in the day. As Phantasm Studios explained, "In 1980 Shigeru Miyamoto of Nintendo created a Popeye video game but couldn't get the rights from King Features. He transformed Popeye to Mario, Bluto to Donkey Kong, and Olive Oyl to the Princess. This was the birth of Donkey Kong." However, it seems that Capcom didn't see things quite the same way, as the Kickstarter page says that "Ghosts 'N Goblins - Demon World (Canceled) is the subject of an intellectual property dispute and is currently unavailable."

Phantasm's website still hosts the details about what it was planning, prior to the shut down. While the plan was to continue with the project anyways, I think that's pretty unlikely at this point. The trouble with its line of reasoning is that Phantasm basically used a popular Capcom brand to build excitement and funding for its own game, something that will still get you in trouble, even if you change the names later. There are many thing in life where improvisation is a fantastic path to success, but messing around with intellectual property is not one of them.