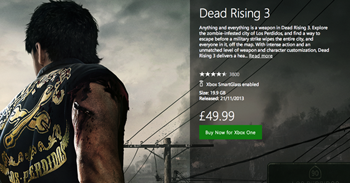 Microsoft has increased the prices of Xbox One exclusives in the UK by £5 on the Xbox Games Store, making the digital versions of the exclusives more expensive than the physical copies.

The company did not explain its decision. Speaking to Eurogamer, a Microsoft spokesperson said, "Pricing for select digital content in some markets has changed since launch." When the Xbox One launched in the region on Nov. 22, digital versions of Dead Rising 3, Ryse: Son of Rome, and Forza Motorsport 5 were £44.99. They are now £49.99.

"Digital content pricing is subject to change and we may occasionally offer various deals or promotions," the spokesperson added. "Ultimately pricing and promotions will vary by region." No reason for the unannounced price increase was given. All Xbox One launch titles are $59.99 in the US.