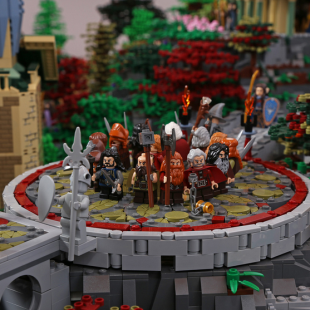 Back in the sweet days of yesteryear it didn't take much to make me feel like an accomplished LEGO builder. One Christmas for instance, my parents got me this castle set that took maybe a day tops to build and lord, if I didn't think I was a demigod of plastic construction after I'd pieced that together. As with most of the naïve delusions that once governed my life however, the internet has since halted any further thoughts of myself being some sort of LEGO savant.

After all, how proud of yourself can you really be over putting together a castle with an instruction booklet when there's folks like Alice Finch and David Frank building cities drawn straight from Middle-Earth? The two recently spent the better part of a year piecing together a massive recreation of Rivendell, based off of the version shown in Peter Jackson's The Lord of the Rings and The Hobbit film series. The duo's replica, overall, measures 10 feet by 5 feet and contains some 200,000 LEGO pieces, many of them custom ones purchased from BrickLink. In short, it's a tad larger than The Lord of the Rings sets you're going to find in the toy aisle at Wal-Mart.

This, of course, isn't Finch or Frank's first LEGO project. Both, in the past, took part in a collaborative project based on Hobbiton, another Tolkien location. Finch has also done a recreation of Hogwarts Castle, while Frank has built several complex castles. The two chose to build Rivendell in part because they believed it to "the ultimate challenge."