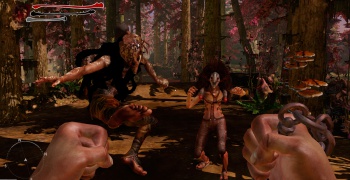 Pay what you what for a slew of games, including Zeno Clash and Rock of Ages, in Atlus' first Humble Bundle.

This week's Humble Bundle sale kicked off today with six titles from Atlus Games, Ace Team, and Tripwire Interactive, marking the first time publisher Atlus' games have appeared in a Bundle. Pay what you want for Zeno Clash, Zeno Clash II, Killing Floor, and Dwarfs?!; pay $6 or more, which is still a total steal, and you'll unlock Rock of Ages and Rising Storm.

Zeno Clash, Zeno Clash II, and Rock of Ages were developed by Ace Team and published by Atlus, while Killing Floor, Dwarfs?!, and Rising Storm are from Tripwire Interactive. According to the Humble Bundle site, all six of these games would cost $89 at full price. Right now, the average price spent by Humble buyers is under three dollars, though the top contributor paid $150.

Less than seven days remain until this weekly deal comes to a close, so check the couch cushions for some change if you want to pay next to nothing for six fun games on Steam. Look out, Mac and Linux users: only Killing Floor and Dwarfs?! are available in non-Windows versions.

Escape to the Movies: Rock of Ages MovieBob 87 Comments