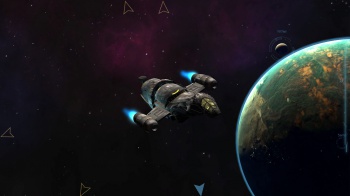 Firefly Online's visuals are finally taking shape thanks to ship designs, character portraits, and even the layout of your bunk.

Firefly's original television series may not have lasted long, but as a franchise, it's done surprisingly well. Between the Serenity movie, the comic book sequels, and multiple tabletop and boardgame variations, fans aren't close to satisfied with the prospect for adventure in the Verse. That said, many seemed a little reluctant upon learning that a Firefly Online MMO was being developed for Android and iOS devices. Maybe that's because it was originally a mobile exclusive (but not anymore) or because we only had only a short teaser trailer to go on. Thanks to newly released concept art images however, those same fans might now feel a change in their Browncoat-sympathizing hearts.

According to Firefly Online's FAQ, the game is "multi-user strategic roleplaying game" set in Joss Whedon's sci-fi universe. Players will take on the role of ship captains, hiring crew members and accepting jobs across colonized planets while avoiding the unique dangers of Alliance and Reaver forces. Based on the revealed concept art, players will be able to choose from a wide variety of ship types and character portraits, and will even be able to leave the ship's confines to complete missions on planet surfaces.

I have to admit, after exploring the wide array of available concept art, I'm finding myself more excited to try Firefly Online than I'd expected after the lackluster trailer. Still, concept art isn't the same thing as finished gameplay, and I'd at least like to see actual footage before I make a final decision.

Firefly Online is expected to launch on PC, Mac, Android, and iOS devices sometime in Summer 2014.