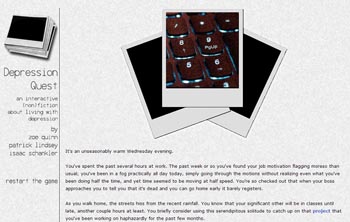 Update: This post has been edited to correctly assert that the claims were made by the accuser and have not been confirmed by another party.

The browser game Depression Quest will be released on Steam as long as its Greenlight campaign is a success. In response to developer Zoe Quinn's Greenlight submission, she claims some users of imageboard Wizardchan harassed her for her gender.

After the first Greenlight submission of Depression Quest, a piece of interactive "(non)fiction" seeking to enlighten players on depression, Quinn said she experienced similar sexist remarks. This time while anonymous posters of boards like Wizardchan allegedly harassed Quinn online, she also said she received sexually harassing phone calls. Quinn removed Depression Quest from Greenlight the first time she experienced abuse, but she will not be doing so this time.

Quinn included two screencaptures of comments on Wizardchan. Anonymous posters used slurs and wrote women cannot relate to anyone with depression, "have no right to be depressed," and other degrading comments. Quinn claims that after posters from Wizardchan called her, she had to change phone numbers.

Harassment is a very real thing many women in the games industry experience. Sexism can prevent games from happening and discourage women from getting involved. A game about empathy for those who have depression should not be met with any level of vitriol or abuse. Turning a blind eye to internet harassment also discourages artists from sharing their work.

To learn more about Depression Quest, visit the game's website or Steam. The game is available for free and will also be free on Steam should it be Greenlit.