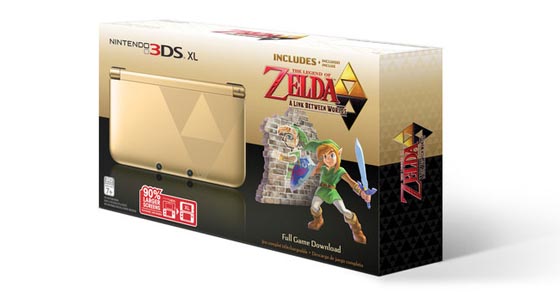 The one-two punch of Pokemon and Zelda resulted in a lot of new 3DS owners this past November.

Nintendo's November sales figures painted a pretty rosy picture for the company's latest handheld, which just hit a milestone of 10.5 million in lifetime sales. Of that amount, 770,000 units were sold during November alone. Recent software launches, like October's Pokemon X and Pokemon Y and November's The Legend of Zelda: A Link Between Worlds, helped further push sales of the handheld system. Each of the two Pokemon games sold more than 225,000 across physical and digital distribution platforms, which brings the total number of Pokemon games sold 2.35 million. A Link Between Worlds sold 280,000 physical and digital copies, and that number increases to 405,000 if you include special Black Friday pack-in deals at Target, which included both the game and the 3DS system.

The new wave of 3DS owners also pushed sales of other first-party Nintendo titles, some of which saw a sales percentage increase measured in the triple digits. Paper Mario: Sticker Star saw the biggest bump, with a 280 percent sales increase over October, according to Nintendo. Other games that saw big leaps over their October sales were Donkey Kong Country Returns 3D, with a 140 percent increase, Luigi's Mansion: Dark Moon, with a 105 percent increase, Mario Kart 7, at a 130 percent increase, and Super Mario 3D Land whose sales went up by 235 percent.

It wasn't as happy a report for the Wii U, unfortunately. Its sales for November were estimated to be at about 220,000, which Nintendo did point out is an increase in sales by 340 percent. It clearly faced some stiff competition, though, from the launch of two other next generation consoles that month. Super Mario World 3D did sell 215,000 units for the month, but was unable to break into the top 10 software sales list for November.