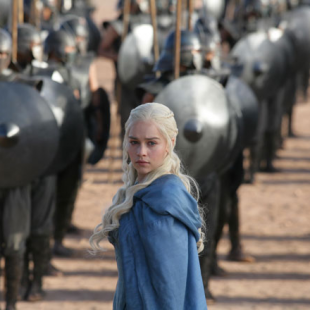 Emilia Clarke will star as the mother of humanity's savior in Terminator: Genesis.

If the prospect of a Terminator reboot, one named Terminator: Genesis no less, leaves you feeling a bit a dubious, don't worry because we're right there with you. It's not that we don't think Hollywood is incapable of producing a good Terminator, it's just that recent years have pretty well demonstrated that the franchise's best days are well and far behind us.

Regardless, we're getting a new Terminator franchise in 2015 and it just found its Sarah Connor. Who you ask, will you be playing the mother of mankind's savior? None of other than the mother of dragons herself: Emilia Clarke. The Game of Thrones actress, apparently an early favorite for the role, officially snagged it on Friday. She, of course, will be the second Game of Thrones actress to portray Connor's character. Lena Headey, a.k.a. Cersei Lannister also held the roll in the ill-fated Sarah Connor Chronicles TV series, which was cancelled in 2009.

Just personally, I'm mixed on Clarke's casting. While I do think she's a capable actress, she's just not someone I look at think "Sarah Connor." Granted, there is definite bias on my part, owing to the fact that I love the original film and consider Terminator 2 to be probably the best action movie ever made. While you can, of course, thank the robotic gravitas of Arnold Schwarzenegger for that, a lot of it also came from how much Linda Hamilton owned the role of Sarah Connor. Of course, they might go in a completely different direction with the character, but I somehow just can't see Emilia Clarke delivering in a comparable way. That being said, we probably have more to worry about with Schwarzenegger who will be returning as the titular Terminator despite being more than 30 years older than he was in 1984.

Terminator: Everything You Need to Know Before Watching Terminator Genisys Marter 8 Comments
Comments on