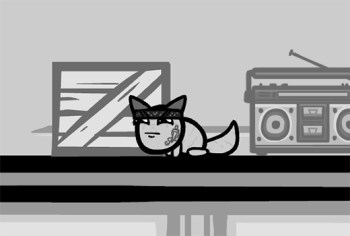 The cats in Mew-Genics, just like those in the real world, will have personalities ranging from passive to psychotic.

Cats, as any cat owner will tell you, have their own unique personalities. Some are fat and lazy; some are remorseless thrill-killers; some seem to find it endlessly amusing to vomit behind the television. It's a reality of the beast that Team Meat seems committed to duplicating, as much as possible, in its upcoming Mew-Genics.

"When a kitten is born its assigned a few cat types based on its stats, there is a large range of cat types from lazy to sexy, from passive to psychotic. each cat type comes with its own set of animations, moves and other visual effects, but most important is that they also effect how the cat behaves," Team Meat co-founder Edmund McMillen explained on the studio's blog.

"There are literally 100s of pieces of furniture your cats can identify with when born but the ones that effect them the most are 'furniture sets'," he continued. "These large items tend to be the foundation of your house, where you place things and where the cats are fed/sleep/die and its these sets that bring the most influence over what the cat identifies as."

Other identity types are represented by "hats" and "costumes," but these elements aren't stored in the cat's DNA and thus cannot be bred. There's also a chance that a cat will identify with an item so strongly that it will actually acquire an element of that item as a piece of its own body, but while that type of mutant is very rare, it is permanent and can be bred into future generations.

"Each mutation or costume comes with its own stat padding, so you could possibly birth an aggressive cat from a passive family because of all that rap music coming out of your ghetto blaster! then utilize that change in behavior to breed a new strand of hyper aggressive kittens that are very into gangster rap then storm the cat fights with your epic army of thugged out pussy," McMillen wrote. But he also noted that the aggression could be caused by a brain tumor rather than rap music - birth defects and genetic diseases will apparently also play a role in your cat's development and behavior.