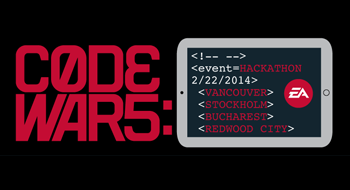 Electronic Arts' previous rules for Code Wars stated the publisher would own the rights to all content created in the game jam.

Electronic Arts will host a Code Wars game jam early next year, but the publisher recently faced criticism over the game jams terms, which stated all content created for Code Wars would become the company's property.

The FAQ, which Ben Kuchera, former editor of Penny Arcade Report, pointed out to have troubling fine print in the rules, has since been taken down. The FAQ stated participating developers would give EA a royalty-free non-exclusive license "to use, reproduce, modify, publish, create derivative works from, and display" the content in Code Wars submissions. EA would also keep physical copies of submissions.

The FAQ was removed because the language was "confusing" and "posted prematurely," an EA representative told Polygon. "Most importantly, we have no intention to own participant code. We appreciate our fans bringing their concerns to our attention so we can address them, and that's why the site was brought down. We'll share more information soon and look forward to a fun developer event in February."

Code Wars is a game jam in which teams of up to five developers create mobile games or apps within 14 hours on Feb. 22. It will take place at four different EA studios worldwide. The game jam has two parts: one is creating the main game, and the other involves completing optional mini challenges. The submissions must include a working prototype of the game and a short explanation of how the game works. Grand prize winners will be awarded a trip to an EA studio, while other winners will receive games.

EA has not yet posted a revised FAQ.