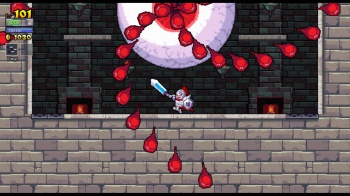 Bug fixes are nice and all, but you can't beat the joy of seeing a batch of fresh new content in a free update. Patch 1.2 for Rogue Legacy is one of those updates, enhancing just about every aspect of the game in some way, shape, or form. And since this is a sadistic roguelike kind of game, some of that new content takes the form of new boss monsters who would like nothing more but to send your intrepid adventurer straight back to level one.

Rogue Legacy v1.2.0 includes five new bosses, which will be even more obnoxiously difficult than their predecessors. "These are not casual battles," the developers warn, "and only the best will succeed." To help prepare for these encounters, you'll also find a new secret character class (which is described as "pretty uber") and four new traits for your randomly generated characters. The dungeon itself will now be constructed from a larger pool of challenges, with 28 new rooms increasing level variety by about 10%.

Of course the patch also includes a small mountain of bug fixes and balance tweaks (characters with irritable bowel syndrome now fart slightly less often, among other changes). Work on the game is still continuing, with the next update aiming to add Steam Cloud support for saves.