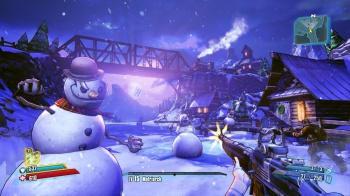 Borderlands 2's latest Headhunter mission puts the Vault Hunters up against one heck of an abominable snowman.

The heroic Vault Hunters defeated the Pumpkin Kingpin last Halloween and defied the monstrous Wattle Gobbler over Thanksgiving, but now they face their greatest conveniently-seasonal opponent yet. As of today, the third Headhunter DLC for Borderlands 2 is available to transport players to the festive town of Gingerton, where an evil snowman threatens to forever ruin Christma- err, Mercenary Day. Right.

How Marcus Saved Mercenary Day, which just hit the shelves of assorted digital storefronts, is the third and final Headhunter DLC of this year. For an entry price of $3, players will be able to step through a magic wardrobe to a frosty new environment, bringing the pain to evil snowmen and other wintery foes. Like the other two Headhunter missions before it, victory will earn players new customization options for their character, including the head of one Abominable Mister Tinder Snowflake. Each character class can also unlock a unique outfit - like Krieg the Psycho's new ugly sweater.

This DLC wraps up the three known Headhunter missions, but Gearbox hints that more Headhunter action could be coming your way next year - I'm crossing my fingers for a Borderlands-flavored Valentine's Day quest. Until then, you can find the three released Headhunter missions on Steam, Xbox Live, and PSN for three dollars a pop.