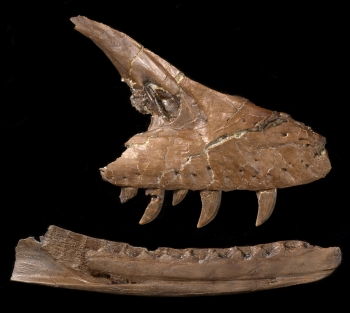 Freshly named and now on display, a new raptor species discovered in Montana lived alongside Tyrannosaurus rex and Triceratops.

A brand new species of dinosaur went on display at the Royal Ontario Museum on Monday, December 16. Originally discovered by an American private collector in Hell Creek, Montana, the new raptor species got a name and a display case thanks to paleontologist David Evans, who recognized the find as a part of a rare specimen. Acheroraptor temertyorum, as it has now been named, was a small, meat-eating dinosaur much like the Velociraptor we know and love. Teeth from the new species have been identified for decades, but the discovery of jawbones in Montana was needed to allow paleontologists to determine how the species fit into the dinosaur family tree.

Covered in feathers and probably about the size of a Great Dane, Acheroraptor lived in western North American between 67 to 66 million years ago, sharing space with Tyrannosaurus rex and Triceratops. Velociraptor, in comparison, was about the size of a German Shepard and lived in Asia. After a three year review of the jaw bones, paleontologists concluded that Acheroraptor was more closely related to raptor species living in Asia than older North American species. This means that it's likely that Asian raptor species were migrating over to North America towards the end of the Cretaceous period and influencing things like the length of their North American cousins' snouts. Neither of these species are quite what we think of when we say raptor, however, because the iconic Jurassic Park versions are based on artists' renderings of the larger and meaner Deinonychus.

The museum has produced a few artists' renderings of the new species, and Acheroraptor certainly doesn't look like the kind of dinosaur you would want to meet in a dark jungle or a theme park's kitchen. No information has been provided on whether or not they could open doors, of course.