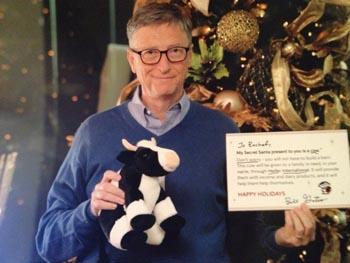 The Reddit user who was matched to Gates is known as NY1227 and detailed her experience in the Secret Santa gift exchange. She notes Gates overnighted her present to her - a package that contained a stuffed cow, a book about traveling, a personal inscription, and a charitable donation on her behalf to Heifer International, an organization that gives needy families animals, seeds, clean water, and safe stoves, or a chance for girls to receive an education. The Reddit user noted she was "so happy that he was able to donate to a charity on my behalf that helped people with both needs and educational benefits. Nailed it, Bill!"

NY1227 still believed this "Bill" was just a "friendly fellow" until she saw the picture of Gates holding up a the stuffed cow and a sign wishing happy holidays.

"And then it finally hit me," she wrote. "All the presents I just tore open, the charity, then everything...my jaw hit the EVER LOVING FLOOR."

Secret Santa events are exciting because participants get to take time to learn about a person they may never have met before. Picking a gift for someone and seeing that person love the surprise gift is a real treat. Kudos to Gates for getting into holiday spirit.

"PS: Sorry for the Apple iPad on my wishlist," NY1227 wrote. "That was really awkward."